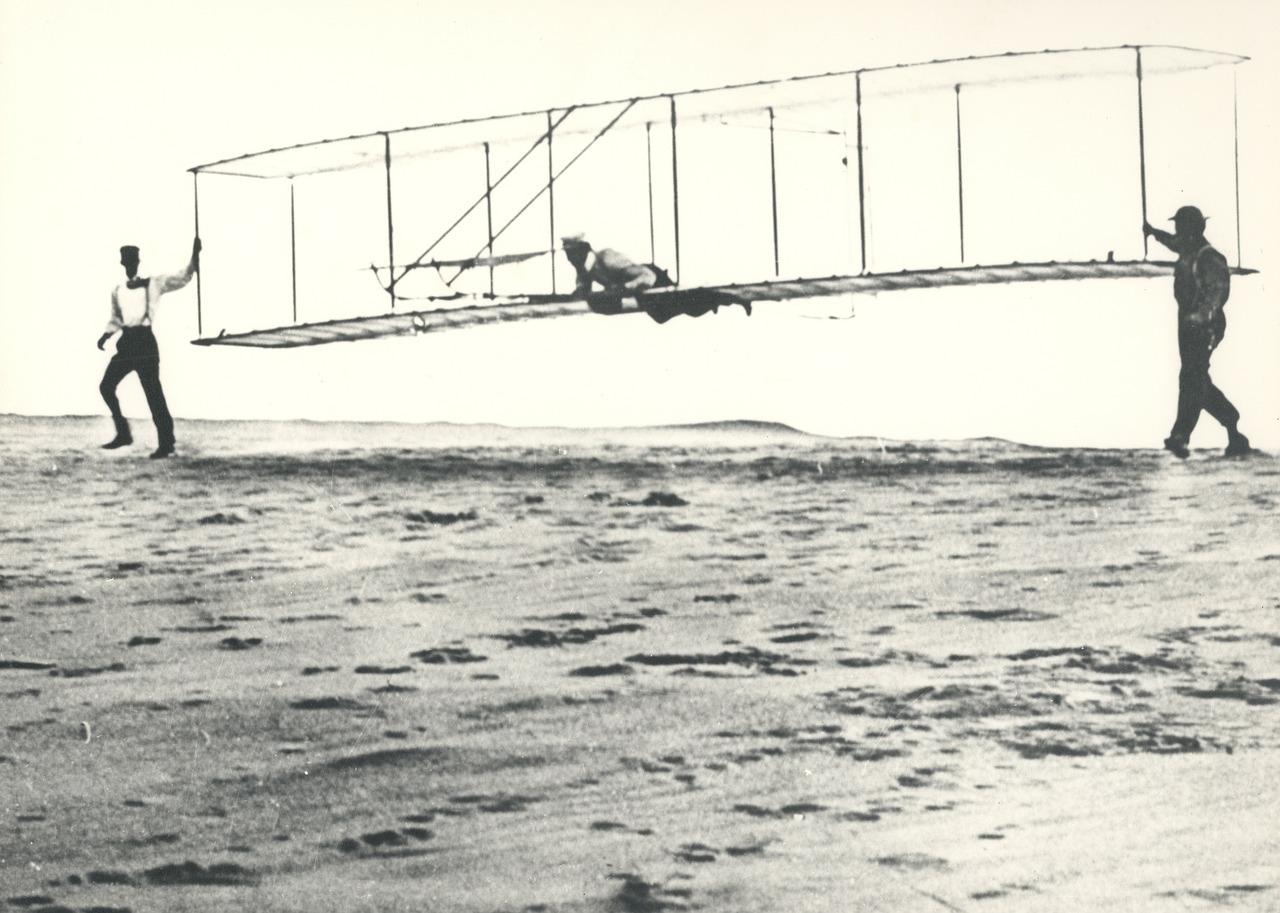 I recently traveled to Brazil which required a total of 48 hours in airports and on airplanes, so I bought David McCullough’s recent book The Wright Brothers and loaded it on my kindle. I thought I needed an old-fashioned story closer to my generational understanding. I had just designed curriculum for a West
Coast university on Kingdom entrepreneurship and all the case studies I used were of high tech companies – Google, Groupon, Adroll, and ICPBio. I wanted to relax a bit.

I found it amazing to read details of the life of these two brothers, sons of a Brethren minister with values and insights easily comparable to modern Kingdom inventors, innovators and entrepreneurs. Five principles are worth highlighting.

John T. Daniels was one of the few who watched that first controlled flight in December 1903. Daniels, who took the famed photo of the event, reported, “It wasn’t luck that made them fly; it was hard work and common sense. They put their whole heart and soul and all their energy into an idea.” McCullough states of Wilbur, “…he was driven by a will of iron which drove him in his work.”It took four years before that day at Kitty Hawk – years of failed inventions, delays, accidents, disappointments, constant study, and ridicule, just to fly a few feet on a sandy beach.
The Dayton newspaper reported the success to be because of “…their grit, their persistence, because of their loyalty to conviction, and because of their indefatigable industry…”
The same can be said today in a world so different from 1903. Entrepreneurs still need the qualities of persistence, diligence, hard work and conviction.

2. They believed in study, research, learning and taking their time.

The parents of Wilbur and Orville encouraged curiosity and made sure there were plenty of books around so the boys learned to value learning. They read incessantly the works of Leonardo da Vinci, George Cayley, Octave Chanute, Otto Lilienthal and Samuel Langley, trying to determine the value of what other pioneers had learned and to improve on former discoveries. It was amazing how they studied the flight of birds for years.The brothers took their time with experiment after experiment resulting in chaos, accidents or defeat, as they labored on – reminding me of Edison’s oft-quoted statement, “I have not failed, I have just found 10,000 ways that won’t work.” When they could not find a gasoline engine which met their specifications, they built their own and then carved their own wooden propellers.After Flyer I at Kitty Hawk, it took another two years to develop Flyer III which flew 852 feet and was the first useable airplane – powered, sustainable and controllable. McCullough quotes a local source in reference to Wilbur, “…the devotion of this preacher’s son to his calling was very like that of a gifted man dedicating his life to a religious mission.”

3. They used their own money and believed in being frugal.

While the brothers used their experience and profits from the bicycle business, and lived simply, the Smithsonian and Samuel P. Langley was spending $50,000 of government funds in an unsuccessful attempt to develop powered aircraft. In contrast the Wright brothers accomplished the flight of Flyer I on Dec 17, 1903 at a cost of one thousand dollars.Entrepreneurs often are better off using a bootstrap method which means using their own resources. According to a Wells Fargo/Gallup study1 most new ventures today are started with less than $10,000.This perspective is not only valid from an entrepreneurial perspective but from a Kingdom viewpoint. Alan Barnhart explains how he and his family learned to live simply so excess profits could be used for Kingdom purposes. How he developed safeguards is an interesting and useful argument. His 17-minute talk is well worth the time:Alan Barnhart – God Owns Our Business.

4. The brothers were humble and character driven.

After a few initial successful inventions, older brother Wilbur learned the value of teamwork and the equal partnership with his brother Orville. Though he remained the leader of the two, he began to write with a “we”. He included Orville in letters from France while preparing to demonstrate to the French how the airplane worked; he valued the opinion of Orville and others.

For years, and even after the first flight, nobody really seemed to care. There was little public interest in their efforts; with the first to show such was the French when military officers came to Dayton to see what was going on. The US public and the US government showed little interest, for more than five years after Kitty Hawk. While disappointing, the brothers labored on to improve on the airplane, all the while living simply and humbly.

After a demonstration at Le Mans, France in August 1908 they became celebrities. People would ask them how to succeed in life and Wilbur once responded, “Pick a good mother and father and grow up in Ohio.” Their lives were dominated by modesty, virtue and selfless efforts. They maintained childhood values such as remembering the Sabbath, keeping reporters and officials often waiting for Monday while the brothers refused to work on Sunday.

5. They changed with the times.

They did not stop with the French demonstrations in 1908 and the fame and fortune which ensued at that time. They continued to improve upon their inventions, to start an aviation company and to lean hard into the legal and financial world of patents, contracts, lawsuits and corporate growth. They continued to set new records for height and duration and provided demonstrations for high government officials in the USA and Europe, flying before the kings of Britain, Spain and Italy.

They established the Wright Company in 1909 and developed a training school and a test flight program near Dayton. Many of the students of Orville became famous Americans such as Hap Arnold and Eddie Stinson. While Wilbur died in 1912 at a young age of 45, Orville lived until 1948 and was an ambassador for aviation his entire life, serving on many boards and government agencies. He also restored the Wright Flyer I, which today is on display in the Smithsonian.

Inventors, innovators and entrepreneurs in the 21st century look very different from Wilbur and Orville but some principles remain such as hard work, life-long learning, frugality, character and keeping up with the changing times.