PC is a 20-year veteran mid-career business man who sold his business and decided to study at a seminary for a few years.  Toward the end of his studies and at IBEC’s recommendation, he spent 9 weeks as a business consultant in Nepal where he consulted with several companies and made many friends from the expat and Nepalese community.

While in Nepal, he was working with a group of five national contractors associated with his media company. They were sitting around sipping tea mid-afternoon talking business developments.  Afterwards they began to share stories with each other.  Out of the blue, one of them said, “Are you a Christian?” “Yes, I am,” PC replied and asked “what about you?”

They responded in unison, “We are everything.”

At their invitation PC then went to the white board of the office and sketched out the story of the Christian faith, explaining why he believed it and was a follower of Jesus. “Wow,” they responded, “that is the first time we have heard that.” 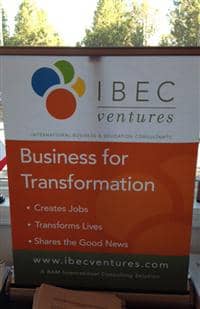 PC of course found a Bible for them, and all five guys arranged for one more meeting just before PC headed back to the USA. They met and again PC shared how Christ had changed his life. Right there in PC’s house, all five of them decided to follow Jesus.

Later, elsewhere in the city, PC was part of a Valentine’s multimedia production which coincided with Valentine’s Day.  The theme was the “Love of God.”  All five of the contractors came to hear the presentation – and they brought their entire staff.  Afterwards they asked how they could learn more and they began to meet with PC.

IBEC works toward an integration of strong profitable businesses with Christian values and principles.  Such meaningful application of faith and work brings transformation of people, communities and entire nations.  It demonstrates love for people (the Great Commandment of Jesus) and brings people to follow Jesus (the Great Commission of Jesus).