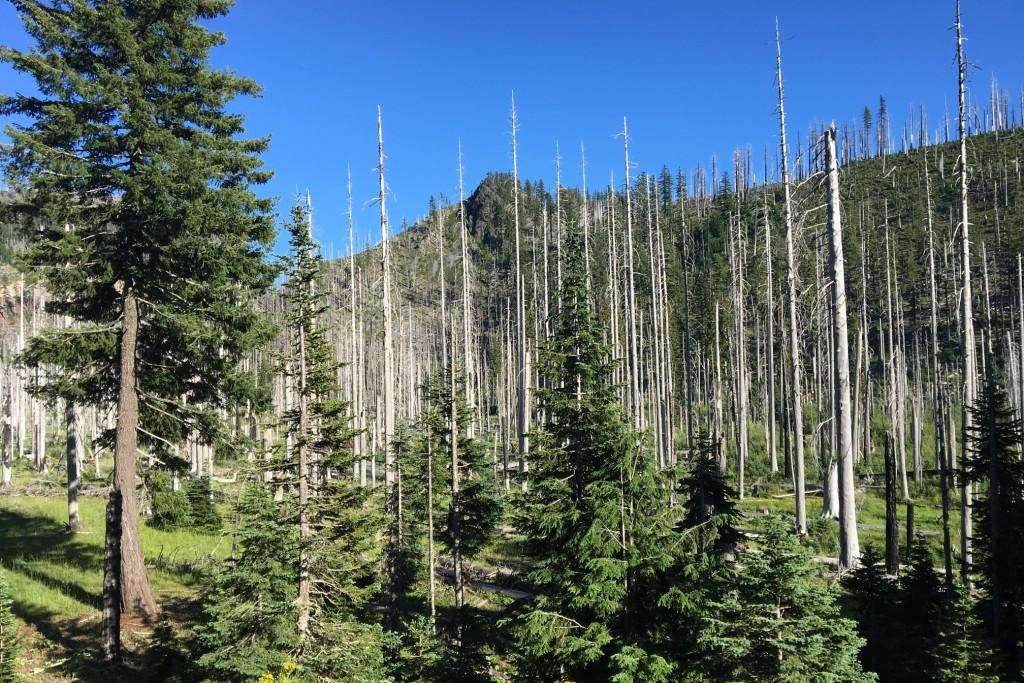 “I delight in my insults, hardships, persecutions and difficulties. For when I am weak, then I am strong.” 2 Corinthians 12:10

My wife and I have lived in central Oregon for the past six years. This small town of 2,000 inhabitants has been a peaceful place after living in Philadelphia for 17 years and in a large Brazilian city for 21 years before that. Here there is little crime, good weather, and only one potential natural disaster – FOREST FIRE!

We have seen several fires in these six years, a couple of them really big. As I write this blog several hundred firefighters have just departed our small town along with their airplanes, helicopters, trucks and scores of tents. They licked this one in record time.

There is no doubt about it, a forest fire is destructive – but did you know it is not all bad? Fire is both an enemy and a friend. Fire cleans the forest floor, removing windfalls and other debris and opens up the sunlight and brings nourishment to the soil. This allows the trees to grow stronger and healthier. Many fires clear wildlands of heavy brush and leave room for new grasses, herbs and regenerated shrubs that provide food and habitat for many wildlife species.

Near Sisters, Oregon where I live, there are a lot of controlled burns. The idea is that low-intensity flames help prevent large damaging fires that spread out of control and completely destroy forests and residences. Fire also kills diseases and insects that prey on trees and thus keeps the forest healthy. Vegetation that is burned by fire provides a rich source of nutrients that nourish remaining trees.

All of this makes me think about the fire of adversity in a business person’s life and in the life cycle of a Kingdom business. The scriptures teach us much about the importance of the refiner’s fire which purifies, restores and tests us – thus making us stronger and better prepared for what faces us in the future (Isaiah 48:10; 1 Peter 5:10; Job 23:10; 1 Corinthians 3:12-15).

What are those tests which are the “fires of affliction” in a BAMers career? I understand these to be things which are outside our control; things we could not have prevented through due diligence or by “counting the cost.” These are afflictions which are the “natural disasters” in the life of a Kingdom business owner.

These are economic issues which exist at the national level and relate to the country or region’s fiscal policy such as tax structure, monetary policy, the currency, or the banking system. This section cannot do justice to a complete understanding of concerns such the fluctuations of a soft currency. An example would be the Brazilian currency in the 1980s when hyperinflation could deflate significant purchasing power overnight. Such instability frustrates international trade agreements and internal business operations alike. I well remember holding a one million unit note in my hand realizing that it was worthless.

Emerging black markets in unstable economies create ethical dilemmas of survival for Kingdom businesses which seek answers among difficult alternatives. How does one pay taxes when the stated “lawful” taxes for income, property, sales, import-export etc. totals more than 100% of revenue. Clearly, no business in that market can survive and at the same time be law-abiding.

In the United States, we have GAAP standardized accounting systems, but most developing countries have no such standards. These are modern day examples of Judges 21:25 “…everyone did as they saw fit.” The net result is a decision-making dilemma and the dire consequence of being unable to please both God and corrupt officials. This would be the equivalent of the fire of adversity.

We know that our Judeo-Christian history has bequeathed us a “rule of law” society, issuing from the likes of the Laws of Moses, John Locke, and the US Constitution. However, many developing countries can be categorized as police relationship-based (at best) or police states (at worst). It is who you know not what you know. In short – officials play by their own rules.

The political challenges include potential expropriation of assets, nationalization of a company, differing and unstable legal systems, unbinding contracts, corruption as normal, powerless police, religious persecution, and political instability. These issues are not aberrant behavior – they are normal behavior.

I remember one of our clients in the former Soviet Union doing all he could to secure good contracts for the purchase of their agricultural product. However, when a glut occurred in the market, the customer refused to purchase the ripened product and our client essentially lost everything. What did a contract mean? It simply was of value if it was to their advantage and not to the advantage of the expatriate business owner.

In most ways, expatriate business owners are dependent on individuals who hold power. For example, foreigners living abroad are granted visas to live in a host country. The country has all the power to provide a visa, refuse a visa, or rescind a visa. In another example, local partners can turn against a foreign business owner when least expected. A client discovered one day that his local partner, an attorney, had decided to take off with all the business assets and there was very little he could do about it. Prior to this, he had done all the right things in mitigating this disaster. As one pundit said, “power corrupts and absolute power corrupts absolutely.”

Religious persecution is well known in the Muslim, Hindu and Buddhist world. There is a fine line between laws which prohibit proselytism and our desire to share our faith. In the end, however, we are at the mercy of local authorities. We have found that the best mitigating factor against religious persecution is to have a legitimate profitable business, provide an excellent service, and create local jobs.

Security issues are unique to the expatriate business owner, whether it be electronic security or security of one’s family in dangerous places. These are real challenges and despite the best efforts to mitigate eventualities, stuff happens.

The Challenge of Culture

It is mandatory that entrepreneurs planning to start businesses in other cultures learn both the language and also the fundamental cultural components of that culture. That sounds simple in a single sentence but that is a life-long endeavor. This is so much more than knowing when to “Kiss, Bow, or Shake Hands”; it is a complex process of learning a worldview and how that extrapolates to cultural norms.

Part of the challenge relates to cultural implications which are so opposite to our enculturation that we tend to resist and try to change that culture. For example, after living in Latin America for 21 years I still had a hard time accepting that sometimes “no” means “yes” and “yes” can mean “no”. This is rooted in another culture’s priority of relationships and not rules; truth is not absolute, concrete and empirical but is determined by situations and people. Group insiders determine what is true and real and it takes time to be a group insider. This explains the difficulty in contract law or in determining what a response to a critical business question might really mean.

Geert Hofstede has helped business people understand complex elements of differing cultures. For example, the Power Distance Index (PDI) informs us how in many cultures with a high PDI, subordinates are highly dependent on bosses. They do not talk to them and certainly do not dispute their autocratic decisions, while in a low Power Distance culture such as ours, we freely interact with management and prefer consultation in decision making. In high PDI cultures, there might be wide gaps in salary between top and bottom, and certainly in social status. All of this has business implications that might not be readily understood. We can make mistakes which may seem like a fire of oppression has hit us.

This is not an exhaustive list by any means but it is somewhat representative of the fires of oppression which can be natural in nature. Are they avoidable? Even if appropriate mitigating factors have been considered, the cost has been counted, and risk assessments have been done professionally, there are still things that might not be avoidable. If and when they happen we know that they can be used by the Almighty to make us stronger and healthier – better prepared for the future. Just like a forest after a fire!

For a good discussion of the challenges of BAM, read: