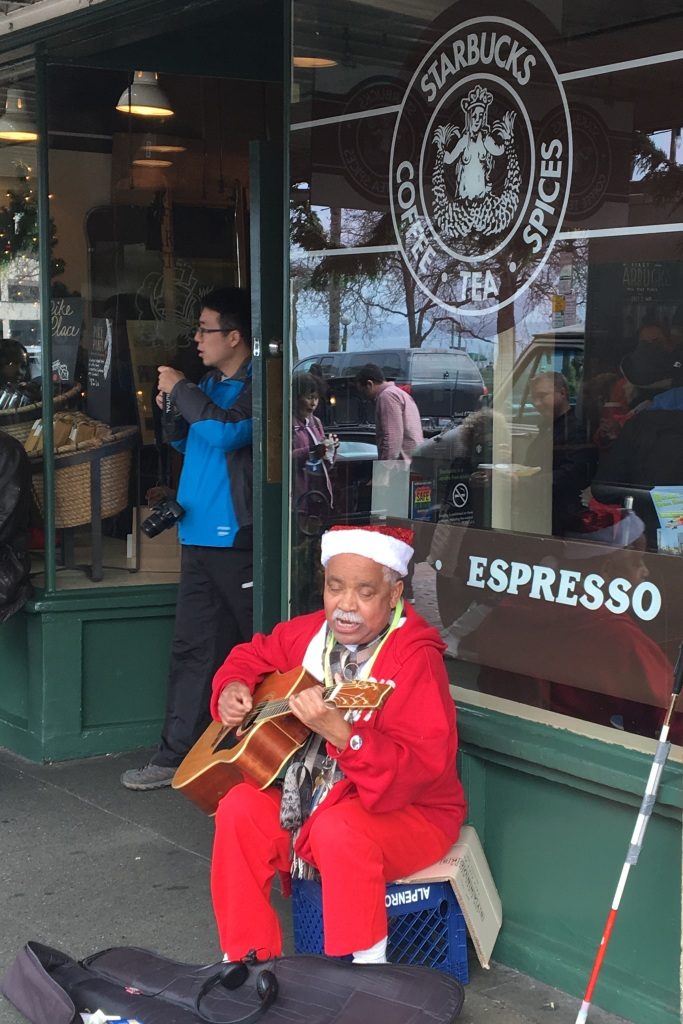 This week I went Christmas shopping at Pike Place Market on Seattle’s waterfront. I stopped at the original Starbucks ® store to listen to a dressed-up Santa singing Christmas carols (note the original logo on this storefront which dates back to 1971).

As I stopped to listen, the old Santa was singing “Joy to the World”. I thought how ironic and interesting! Surely, the Starbucks experience brings plenty of joy to millions of people, but real JOY comes from Jesus, the God of the universe being born incarnate among men in this world.  Spiritual rebirth is a key part of what IBEC is all about – spiritual transformation as people begin to follow Jesus.

I got to thinking about how this amazing entrepreneur, Howard Schultz, grew this simple “hole in the wall” storefront to a Fortune 500 company (# 146 in 2016) and 25,000 stores worldwide. The city of Seattle itself has 142 outlets. After reading through a brief history of the company, I selected some of the factors which account for the success of Howard Schultz and Starbucks.

Spirit of experimentation. From the beginning Mr. Schultz was willing to try new ideas. After purchasing the company from his boss, he began to sell coffee to fine restaurants and espresso bars. He opened up stores with a drive-through and experimented with the Frappuccino. He was not averse to taking risks.

Attitude of being a learner. Mr. Schultz always wanted to learn. He traveled to Italy in 1983 where he saw ideas for a potential coffee house culture in the United States. He knew there was always more to learn and so he observed, studied and applied – starting in Seattle.

The importance of advocates. He convinced the founders of Starbucks to test out the coffee house concept and then found investors so he could test out his ideas. He knew that no entrepreneur can do it alone – entrepreneurs need others; they need a team.

Care for employees. Early on Mr. Schultz offered full benefits to employees and in 1991 he offered stock options, the first privately owned US company to offer this. Starbucks is known today as a pleasant place to work where employees are treated right.

A mission statement. Mission statements are only useful when they guide behavior and can be used to measure success. Starbucks’ statement does just that, “…To inspire and nurture the human spirit – one person, one cup and one neighborhood at a time.”

Culture is important. The culture of the store is innovative and representative of a place which attracts customers. Employees are well-trained in customer service and courtesy and speed have become a mark of the Starbucks experience. In the words of Peter Drucker when describing entrepreneurship, “…applying management concepts and management techniques (asking what is of ‘value’ to the customer?), standardizing the ‘product’, designing process and tools, and by basing training on the analysis of the work to be done and then setting the standards it required.” 1 Howard Schultz provided a distinct culture which took an old product and created a new market and a new customer.

Collaboration and partnership. Starbucks has grown and continues to set the standard in the coffee marketplace with interesting partnerships such as with Apple – selling music as part of the experience; with Kraft Foods – to see Starbucks products; with Arizona State University – for a business degree; and with PepsiCo in Latin America. Mr. Schultz knew that partnerships are advantageous to business.

While one might not agree with all the decisions of Mr. Schultz and the Starbucks corporation, certainly these few items are some which can be applied. We can learn from an entrepreneur of our day.

But let’s not forget the Santa singing in front of the store during this Christmas season. Starbucks is profitable and sustainable, is a master job-creator; and Starbucks is a good steward of the earth’s resources, but they may lack the fourth important item in the Quadruple Bottom Line: spiritual capital which comes from following the Creator-God: Jesus.” 2 Let’s remember that and focus on the real “Joy to the World” this season. “Let every heart prepare him room.” 3