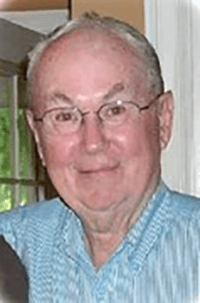 We in IBEC knew him as Bob, our board chairman for most of IBEC’s existence, a friend, mentor, leader and encourager of all that we do.  He had been a contract engineer with the Naval Air Systems Command and had spent 15 years in upper management.  In retirement, he helped numerous Not-For-Profits with his skill set.  He passed away on October 7, 2019.  We will miss him greatly.

I first met Bob in 2001, when the mission agency I served with retained him to coach us in strategic thinking.  When we started IBEC in 2006, he responded with favor when I asked him to become one of the first four members of the IBEC board of directors.  He was a natural to be the first chairman as he joined Harold Schell, treasurer; Torrey Sharp, and myself.

Bob and I would meet regularly, usually at the Olive Garden in Willow Grove.  We both loved the soup and salad for lunch.  I learned a lot from him.  Some of it was fun stuff like learning of his work with the DARPA Defense Research project, which allowed his engineering expertise to help make a little gizmo for the moon project.  I loved to talk with him about his steers and even eat burgers from last years’ animals.  Jane and he always made me feel at home when I stayed overnight before IBEC board meetings.

I loved the fact that he loved the Gospel and was always interested in how God was reaching the world through professional people like him – businesspeople, engineers, architects, accountants, and just about anyone who served in the marketplace.

The most lasting contribution that Bob made to IBEC was the way he thought, always in a strategic manner.  He asked hard questions and never accepted a fuzzy answer.

Strategy is most simply defined as the art of devising or employing plans or stratagems toward a goal.

Bob could think strategically, and he could plan accordingly.  It was not just because he was an aeronautical engineer by career, but it was who he was. He led IBEC as a strategic thinker and planner.  In our first year, he developed a 10-stage development process for IBEC.

All that we did came under his artful eye.  Was there a goal?  Did the plan serve the goal?  Was the goal measurable?  Did the budget match the goal and did it balance?  Was the strategy coherent and was it feasible? Sometimes, these were hard questions, but Bob always pushed for answers.  I often thought that he could have invented the lean startup canvas, because he just thought that way.

He has passed to his Heavenly reward, but he used his life in a way that gave glory to God, helped IBEC to get off to a good start, and helped others in his sphere of influence to grow in their ability to serve strategically.  Thank you, Bob!