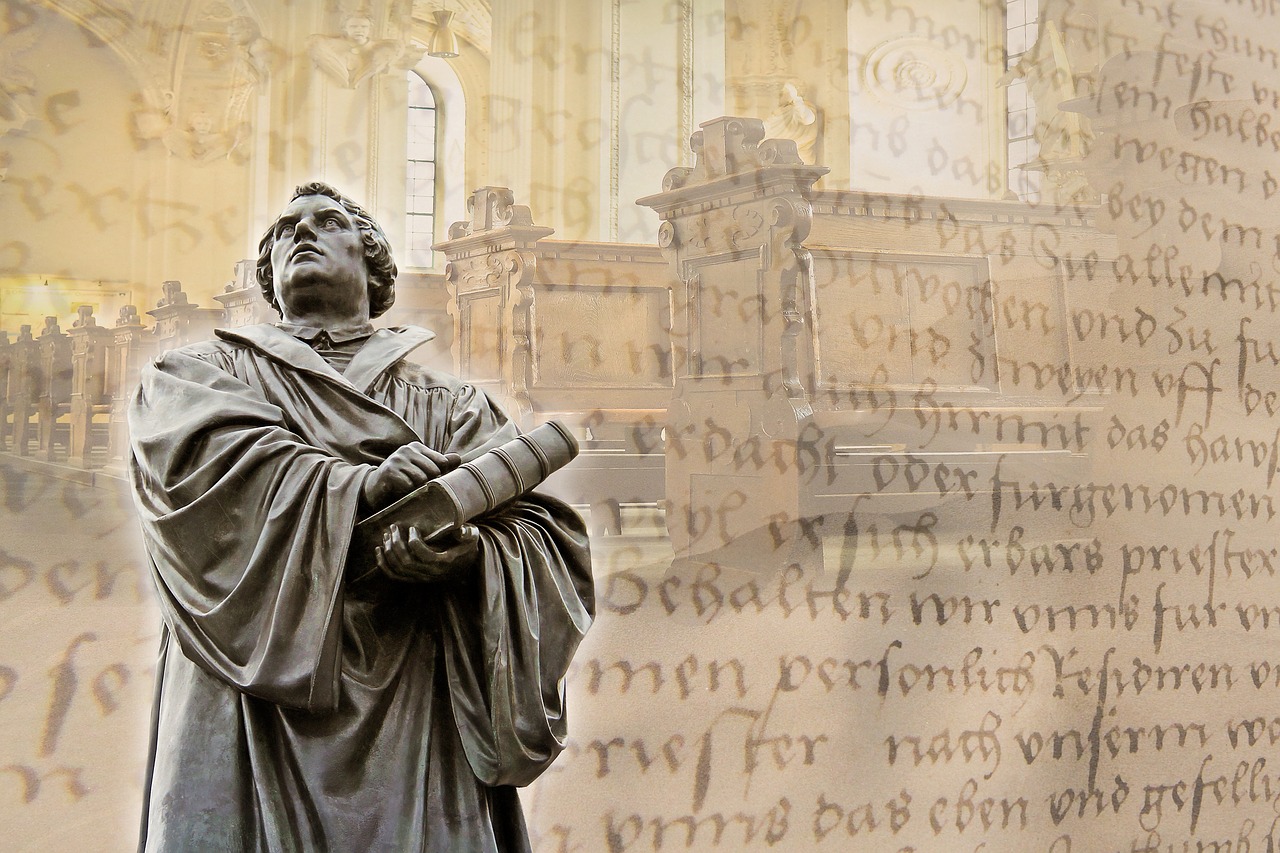 Protestant churches around the world will be remembering Martin Luther and the tenants of the Reformation this month as October 31 commemorates 500 years since Luther nailed his Theses to the door of Wittenberg Castle in 1517.

Most of us would probably find it difficult to come up with more than two or three of those theses, but most of us can probably articulate the essence of Luther’s and other reformers’ vision – to bring the Christian church back to the truths of the gospel which Jesus left us.  In the subsequent years to 1517, Lutherans, Reformed, Puritans, Pietists, Wesleyans and many others sought to “reformare” – the Latin meaning to form again, or to change.  Modern dictionaries indicate that to reform means to change something with the intention of setting it back on the right path.Swedish apologist for Business as Mission (BAM), Mats Tunehag reminds us that BAM as a term is only about twenty years old but the idea is as old as the gospel itself.  It is not new.  BAM today challenges some of the practices of the past 150 years and in this sense can perhaps be considered a reformation – a re-discovery of Biblical truths and practices. Why?

1.  BAM is sourced in the Cultural Mandate and the Theology of Work.

For too long evangelicals have ignored the fact that in the creation story we see God as a God of work (Genesis 1-3). As integral to that narrative, God declared that the first humans are to also be creative and be workers in the garden as good stewards and creators within the physical realm.  Centuries later God reminded Moses that his people were creators “…remember the Lord your God, for it is he who gives you the ability to produce wealth.” (Deut. 8:18). Today, for-profit businesses are the natural and biblical mechanism for creating wealth.Calvin saw work as a means to do something well as a testimony to others.  As we work with excellence, diligence and dedication we are responding to God and is our highest calling. Similarly, Luther declared that that “…the call of God comes to each in the common task.”  Today, apologists for BAM remind us of the value and importance of work as a  demonstration of who God is to those around us.  When we in business humanly create good things for his glory, we are obeying God and modeling who God is.  Some call this the Creation Mandate or the Cultural Mandate.

Several theological, historical and political events in the twentieth century placed great emphasis on the Great Commission at the expense of the Second Great Commandment.
“‘Love the Lord your God with all your heart and with all your soul and with all your mind.’ This is the first and greatest commandment. And the second is like it: ‘Love your neighbor as yourself.’ All the Law and the Prophets hang on these two commandments.” (Matt. 22:37).

What does love look like in our world today with so much poverty, injustice and unemployment? BAM is a re-discovery of ways to meet human need without disregard for the Great Commission. Fundamentalists in mid-twentieth century feared the social gospel as likely destructive of the faith and projected a soon return of Jesus to earth.

However, just as Jesus addressed human physical need and linked it with spiritual need, so job creation is an example of what Jesus means by loving your neighbor.  It is what Jesus would do today where there may be 50% unemployment, extreme poverty and gross injustice, whether the second coming of Jesus is imminent or not. Loving your neighbor for BAM practitioners means producing products and services in ways that provide for my neighbor, and doing so while demonstrating Jesus’ values.

During the plagues of the 2nd and 3rd centuries when thousands were dying daily and as many as could were fleeing the cities, the Christians stayed in town and did what they could to help, even their pagan neighbors.  They loved their neighbors.  Today such love which highlights the Second Commandment of Jesus means jobs in Nepal (and everywhere), an eye clinic in Ethiopia, poultry production in the “stan” countries, alternative energy in the Middle East, a fish farm in east Africa and other similar projects.  Modern day businesses call it CSR – Corporate Social Responsibility, or social responsibility.  I simply call it what Jesus would do.

3. BAM is the re-discovery of the integration of faith and work.

Since the times of the Greek philosophers, work has been considered distinct from philosophy and religion (or ‘thinking’ as Socrates put it).  This sacred and secular dualism reflected an inferior view of work and the philosophy became known as Gnosticism.  Today we often refer to it as the Sacred-Secular Divide (or Dichotomy).Prior to this Gnosticism distortion most of God’s people in the Old Testament followed careers where they were challenged to represent God through farming, ranching, the military, politics, or business.  Their faith was integrated with work.In modern times, what Christians think and do in private and in church is often separate from what they do at work.  Monday values do not integrate with Sunday values, or at least they are modified.  Many theologians and sociologists alike have demonstrated that evangelicals today are indistinguishable from unbelievers in the general culture.But the Quadruple Bottom Line of BAM insists on a high value for four domains – a for-profit business; job creation; Jesus values and the making of disciples; and the stewardship of creation.  All of it is biblical; all of it is important.  The Great Commission is integrated in our business.  We glorify God in all that we do and we do it intentionally.  This is the missional part of the term BAM.

4. BAM means every Christian can and should be involved.

Prior to the reformation, the gospel resided with the professional clergy and the Bible was not available to the common man.  Ministers had a special relationship with God and they mediated God’s grace and forgiveness through the sacraments.  Only those who could read Latin and the ancient languages could read what God was saying to mankind.  Luther and others unpacked the biblical “priesthood of believers” and translated the Bible into the common languages of the day.  God and the Holy Spirit could then rightly speak to every believer.  The reformers addressed the functional sacred-secular dichotomy of the day and thus made it possible for ever believer to be equally connected to Jesus and the gospel, and live it out in the marketplace.

However, for the past 150 years, the Christian church has outsourced some aspects of the Second Great Commandment and the Great Commission. Missionaries are paid to carry the good news to the ends of the earth; professional clergy are the guardians of truth; and the federal government and the aid agencies seek to “love our neighbor” in distress.

George Gallup states that America today is a “nation of biblical illiterates”1 with fewer and fewer Christians attending a Bible teaching church or reading the Scriptures for themselves.  With such ignorance, it is no small wonder that business and professional people have been marginalized from their role in every priestly endeavor.  But work is worship; business is ministry.  Business does not only make profit in order to support ministry; it is the end in and of itself – for the glory of God!

In the words of Dallas Willard, “Holy people must stop going into ‘church’ work as their natural course of action and take up holy orders in farming, industry, law, education, banking and journalism with the same zeal previously given to evangelism or to pastoral and missionary work.”1

Twentieth century pastor and author, A.W. Tozer stated, “The laymen need never think of his humbler task as being inferior to that of his minister.  Let every man remain in the calling wherein he is called and his work will be as sacred as the work of the ministry.  It is not what a man does that determines whether his work is sacred or secular, it is why he does it.  The motive is everything.”

5. BAM declares and practices all for the Glory of God.

The reformers believed that all individual believers were free to worship, serve and glorify God and enjoy him forever.  A believers’ only ambition is the glory of God – Soli Deo Gloria.  Such was carved into the organ at Bach’s church in Leipzig and the composer signed his works with its initials.  Bach and others declared the recovery of God first and foremost in everything.Contemporary theologian Michael Horton2 along with many historians, considers the far-reaching influence of the reformation in transforming culture.  The work ethic, public education, civic and economic development and a revival of music and the arts all relate to God and His glory.  The reformers emphasis on sin, salvation by grace, and the sovereignty of God demonstrated that with the true gospel at the center, effects in the real world will follow.It would seem that the church today does not lead in societal change, but to the contrary is drifting into the norms of culture; however, BAM is an effort to bring at least the world of business back under the domain of God’s glory in the world.  This is more in line with the first centuries after Jesus than with the 20th century.The book of Acts is full of evidence that everyday working believers, as noted when they left Jerusalem (Acts 8:1), took their lives and jobs into the marketplace throughout the Mediterranean world and everywhere lived and preached Jesus.  By Acts 17 they had “caused trouble all over the world” meaning the Greek-Hebrew world between Judea and Greece.  They did that by living for the glory of God in every aspect of life.
BAM today envisions the 21st century as analogous to the first century, unlike the twentieth century, where the marketplace of life (work and business) was considered less than spiritual, wealth distribution was considered more important than wealth creation, Christian business people had limited roles in the church, seminaries did not teach courses on the theology of work and business and, job creation was not valued as a primary means of addressing injustice in the world.

Yes, BAM seeks to bring all of God’s creation into the mainstream of the church and every believer’s life and practice. Business as Mission in many ways mirrors the Reformation of 500 years ago.